Well... it was technically not ALL in because we went to Chick Fil A. My husband and I enjoy going out to eat but I don't let us very often because it is too expensive. When we want to go we usually choose Chick Fil A. We are both creatures of habit and the employees at our Chick Fil A are realizing it too. I think we are crossing the bridge of becoming "regulars". That has never really happened to me before with maybe the exception of a Mexican food restaurant at home or the Whataburger after Sunday church in El Campo.

After Chick Fil A, we read some together. This book is beautifully written. I feel caught up in her words. It is a beautiful tale of the Spirit's movement so far.

Then, I challenged my hubby to a game of Scrabble. We played a lot over our second anniversary weekend, and I beat the hubs almost every game we played. Since he played the iPhone app awhile ago, he has gotten significantly better. I must admit, I thought I had the game in the bag at the beginning. I was really putting up some big numbers but Justin slowly started coming back. It came down to the last play. Justin got rid of all of his tiles. Had he not have found that last move, I would have won for sure because I had a big pointer left in my hand. Besides losing, it was a great game.

We settled in to watch 500 Days of Summer as I drifted off to sleep in my husband's arms. It was a great evening. We rarely get to relax like we did last night. I am a grateful woman for so many things... as I awoke this morning, I am especially grateful for my husband. 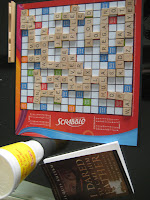